37 Cents Per Kilo: The Economics Of Grape Growing On Pantelleria

I write about the people, business and politics of the wine industry. Opinions expressed by Forbes Contributors are their own.

That’s the going rate for zibibbo DOP grapes on the small Mediterranean island of Pantelleria, located between Sicily to the east and Tunisia to the west.

It’s an awful lot of work for very little money, especially given that the bush vines are untrellised and low to the ground, between knee- and waist-high, which means that any pruning or planting or harvesting needs to be done – all by hand – while bending forward at the waist.

It’s also something worth considering the next time you open a bottle of wine from the island, which is known in particular for its Moscato di Pantelleria and its Passito di Pantelleria, regarded among Italy’s best dessert wines. That’s the “genie in the bottle” you’ll be releasing when you open it – a theme we’re exploring this harvest season, as I wrote in my previous post.

The process and culture of grape growing on the island was the subject of a recent documentary by filmmaker Nicola Ferrari and his wife, producer Anna Silvia. The film is called Cirri di Ventu: Agricultura Eroica a Pantelleria, with reference to the “heroic agriculture” required to grow and harvest the grapes, along with the complications (to both farming and transport of the grapes off the island) that are brought by the fierce sirocco winds that blow throughout the region.

The original working title of the film was in fact “trenta sette centesimi al chilo,” or thirty seven cents per kilo, and it was the first recipient of a prize by the Commune di Pantelleria and its Political Ministry of Agriculture and Parks; the award was created to recognize the use of the arts to enhance the island’s heritage, and the film is scheduled for English translation in mid-October.

Below are excerpts from my Q&A with filmmaker Nicola Ferrari, who speaks about a sense of belonging, dumping grapes into the sea, and the younger generation’s efforts to preserve their heritage.*** 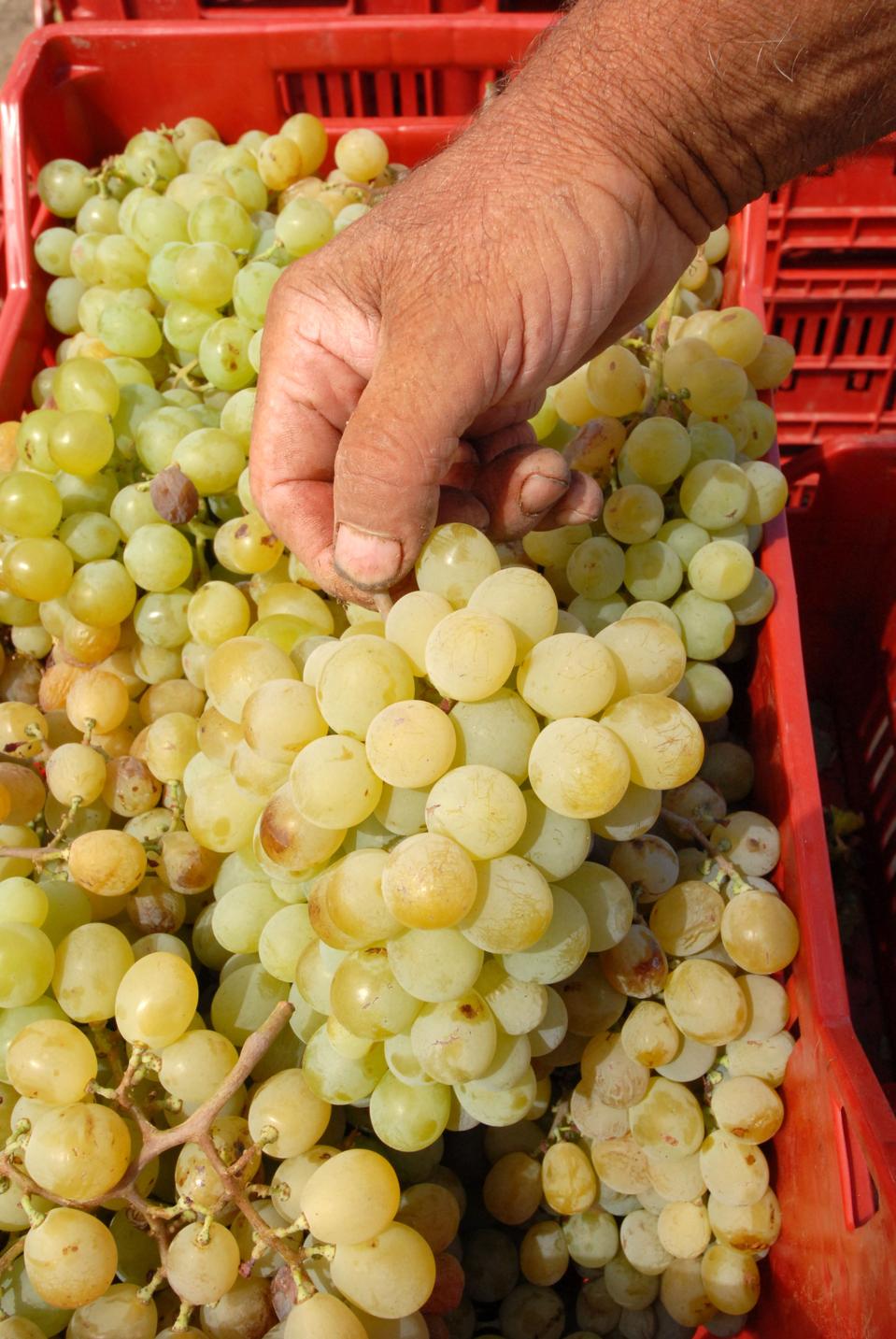 Workers collect Zibibbo grapes prior to drying on the island of Pantelleria, Italy, on Saturday, Sept. 8, 2007. Photographer: Chris Warde-Jones/Bloomberg News

CH: Tell me more about this “heroic agriculture” that’s practiced on Pantelleria.

Ferrari: It is an activity that does not use mechanical means. Peasants are bent throughout the year on zibibbo plants, which grow in the conch and are a few tens of centimeters high. The work is done by old peasants, most of them over 60 [years old]. “The earth is low,” they say, to [describe] all their hard work. The intense and sun-drenched faces express pride and sense of belonging to an ancient and rooted peasant culture. But they also express concern for the future of new generations that fail to earn enough with this business.

CH: Why is this a concern?

Ferrari: Until the 1960′s, zibibbo grapes were appreciated and consumed fresh mainly on the tables of southern Italy. Then the market came into crisis and turned more to the vinification for the production of the Passito but the vineyards [for commercial and viticultural reasons] are no longer profitable.

CH: How is the younger generation responding to this?

Ferrari: Some young people were not scared of these difficulties. They have gone abroad, have acquired new techniques and new knowledge, and now [there seems to be a growing] desire to continue cultivating the fields. They are aware that there will be no easy gains but they will show pride and attachment to the earth.

CH: I’ve heard about farmers dumping their grapes into the sea because, as I understand it, they were frustrated over the winds preventing their harvest from being sold and taken to Sicily for processing. What is your experience of this?

Ferrari: In 2012, farmers had a bumper crop but due to Mistrale winds the ferry was not taking any trips to Trapani [in Sicily, where the grapes are made into wine]. The holding tanks at both Pellegrino and Donnafugata [two major producers on the island who purchase most of the grapes] were full. Between the heat and the sun and no where to sell the grapes, to the sea they went. Last year in 2016 the crop was so small due to not enough rain, most farmers could not get enough weight from the fields to pay for the effort so most cut the grapes and left them in the field to be turned into the soil in an effort to replenish the vine. This year the brix was high but the quality was not superb. Most did not get the heavy crops.

*** My thanks to Peter Lambert for facilitating this conversation.

Cathy Huyghe is the co-founder of Enolytics and the author of Hungry for Wine: Seeing the World through the Lens of a Wine Glass. Find her online at cathyhuyghe.com, Twitter, Facebook, and Instagram.